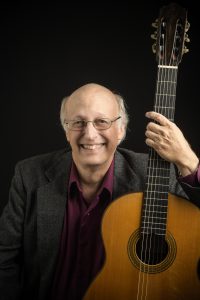 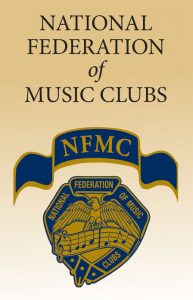 Jim McCutcheon is the Guitar Advisor to the NFMC Festivals
Bulletin, a position he has held for many years. Below is an
article which he wrote which might be of interest to guitar
teachers (both classical and pick-style) who want to enhance
their offerings to students.

The FEDERATION video mentioned in the Soundboard article may be found here.

If you would like to communicate with Jim McCutcheon directly about anything having
to do with NFMC, please email me at
jim@mccutcheonmusic.com.

The National Federation of Music Clubs Festival:
How Guitar Teachers and Their Students Can Participate and Grow
by Jim McCutcheon [updated January 2001 from Soundboard April 1995]

Several years ago I was invited to be a judge at a National Federation of Music Festival. At that time, I had not even heard of the organization.

When I arrived at the site, I was impressed when I saw about thirty other musicians at a 7:30 am pre-festival judges meeting. We were instructed to emphasize the positive in our evaluations, and if scores lower than the highest score were given, to be specific stating exactly what was missing in the performance. When the meeting adjourned, and we walked to the judging rooms, I was amazed when I saw about 250 kids in the hallways, all dressed up and ready to play for their events. Most of the children were going to play the piano, and many were playing violin. Only one was playing the guitar.

Clare Callahan has postulated that it will take over a century for the guitar to be accepted in the mainstream world of serious music. This can happen given enough time and given the development of good relationships between guitarists and non-guitarists. This article is written to describe a bridge with which we can establish common ground with other musicians and improve ourselves by learning what other serious music educators are doing for their students.

The National Federation of Music Clubs. What is it?

Throughout the USA there are hundreds of local groups who have organized clubs to promote music in their area as well as to give local music teachers and performers a forum in which to meet. In Dayton, for example, The Dayton Music Club was founded in 1888 and today has over 300 members, many of whom are music teachers and arts patrons. In addition to monthly meetings which usually feature performances, the club awards about $3,000 annually in scholarships for students of its members to be used for musical activities.

The National Federation of Music Clubs was formed in 1898 in an effort to coordinate the many local clubs nationwide and provide them with programs and ideas which would promote their goals. The Federation was listed on the United Nations roster in 1949 and chartered by the U.S. Congress in 1982.

The National Federation publishes Music Clubs Magazine on a quarterly basis. The magazine is devoted to music, often with articles on pedagogy and music history. While it is not published in an academically rigorous format, it does have a warm personality.

Each state has its own federation which is responsible for coordinating schedules and disseminating information to all federated club members in that state.

Today within each state are several local federated clubs with “senior club” status. A senior club is one which has an adult membership (children 18 and under belong to federated junior clubs). Individuals may join the Federation as “senior special” members if there is no senior club available in their area.

At all three levels, national, state and local, the Federation is responsible for promoting a great many good ideas on which its members have the option to act, including music education, community service, political action, performance opportunities, scholarships and networking.

The Federation Festival. What is it?

For the Federation Festival, each student prepares two pieces to play for a panel of between one and three judges. One piece must be chosen from a graded repertoire list whose borders between levels overlap a bit. The list is available in the Federation Bulletin from the National Federation office in Indianapolis (address below). The second piece may be the student’s choice, but must be by a different composer and on a comparable level with the required piece. Students do not compete against each other; rather they are judged on a five-tiered scale, with the following ratings: Superior, Excellent, Very Good, Good and Fair.

Notice that the emphasis in these ratings accentuates the positive. “Superior” does not connote “amazing technical virtuosity” as much as it means that the performance was accurate in terms of notes, rhythms and style – in short, that the student has mastered the music well when considering the student’s age and the difficulty of the pieces.

Judges fill out a form for each student which has sections for all aspects of performance, including accuracy, technique, musicianship and poise. Judges are instructed to make constructive comments – positive and negative. In fact, if a student receives less than a superior mark the judge must explain why. If the judges give a student different ratings, the student will be awarded the higher rating if the ratings are adjacent or the average if the ratings differ by two levels.

Students receive points for the ratings they receive, and their records are kept on file by the local festival chair. As the students accumulate points each year, they can receive gold cups for each event in which they have participated if their teacher is enrolled in the gold cup program.

Classical guitar students can play in several events at the Federation Festival: solo, duet, ensemble and concerto. There is also a solo and duet event for “plectrum” style guitarists. Memorization is required for the solo events, but not for the duet and ensemble events.

It is important to note that only students of teachers who are members of federated senior clubs (or “senior special” federation members) may participate in the Federation Festival. Also, students must belong to a junior club which is registered with the state federation. The junior club can be sponsored by a senior club, or simply be a group of students that belong to an individual teacher. Ways to do this are discussed later in this article.

I have participated actively in the Federation Festival for seven years, and I have found it to be of great value on several levels. Here is a list of benefits:

1. It is very motivational for the student. For most musicians, an upcoming performance provides great incentive for increased practice. The same holds true for our students. If a student is prepared well for the first federation experience, and is successful with it, when the time comes the next year you can expect their practice time to double or even triple. I believe that children like being part of something larger than the weekly guitar lesson, and that they enjoy seeing themselves climb a ladder of difficulty. Many students like earning a trophy that actually means something beyond “I showed up for the games” – the first level trophy takes three years, and it is amazing how that does not deter young students.

2. It is instructive for the student. Often a student will get a message from a judge which is something their private teacher has been saying all along, and suddenly it connects. Sometimes a judge’s message will be different from things the private teacher has said, and this can be used to broaden the student’s perspectives on that topic.

3. It is preparatory for the student. The performance situation at the Federation Festival is remarkably like college auditions and boards, but without the scales, sight-reading and questions.

4. It is instructional for the teacher. The repertoire list usually includes titles that are new to teachers, and this encourages them to broaden the repertoire they teach. Judges’ comments also provide a teacher with an objective view of several aspects of a student’s performance and I have found this to be very helpful.

5. It offers a system to expand a teacher’s offerings. For example, if you have four or five young students, the Federation Festival provides a goal for getting them together to play duets or larger ensembles and work as a team to get the best possible rating.

6. It provides a chance for your students to get an impartial rating from your peers. This means a lot to some parents, and for many is a sign of a teacher’s professionalism. (On this note, many excellent piano teachers have been having their students play for years not only at the Federation Festivals, but other similar events as well, such as Piano Guild Auditions and Ribbon Festivals.) Aside from the issue of professionalism, having your students participate in this kind of event demonstrates your own confidence in the work you are doing.

7. It offers participating teachers a networking opportunity and the chance to interact with other serious private teachers. The benefits of knowing more musicians in your local area are obvious for the individual teacher, and in a larger way, very good for the guitar as well.

How do I get started?

I urge you to visit http://www.nfmc-music.org/index.php?src=gendocs&ref=Festivals
and look around.

National Federation of Music Clubs
1336 North Delaware Street
Indianapolis, IN 46202.
or you can order it via email at nfmc@metdirect.net.

If there are enough guitar teachers in your area interested in this, your local guitar society could become a senior federated club. In my case, the Dayton Classical Guitar Society registers each year. The cost to our society is around $120 annually depending upon the number of members, but we have found that being federated has attracted members who would not normally have joined, so this cost has been largely offset.

Next, call the National Federation office and order the Federation Festival Repertoire Book. It costs $10.00 per copy. It contains the graded repertoire lists for all the instruments, including the classical guitar and “plectrum” guitar. It also contains the general rules for the event. The current book will be in effect through 2020.
They accept MasterCard and VISA.  The bulletin is also available at some music stores.

Keep the repertoire in mind as you teach your private students during the year. I often wait until a student has mastered one of the required pieces, and then I bring up the possibility of performing at the Federation Festival. Students tend to be more open to new experiences like this when they think they will succeed. It is also a good idea to start preparing students early for the Federation Festival, especially at the more advanced levels of playing.

You can obtain the Federation Festival Application Forms from your local festival chairperson. The forms are due about six weeks before the Festival occurs, with payments that vary. Since the Federation Festival is presented totally with volunteer help, you might be asked to help with some of the administrative details of presenting the Federation Festival, such as finding suitable judges, helping with the record-keeping, etc.; so be prepared to volunteer. It is a great way to make new friends and also bring the guitar into the flow of your local music community.

Finally, I invite you to call or write me with your questions and/or comments.

Jim McCutcheon currently teaches guitar at the University of Dayton, Miami University of Ohio and at Wright State University. He is the guitar advisor to the National Federation of Music Clubs Festival Bulletin. www.jim.mccutcheonmusic.com

Once again, the complete set of rules and repertoire for the National Federation Festival is available only in the bulletin! It is available by writing NFMC
at the address given above.