With over four decades of performing experience in the U.S. and abroad, several artistic awards (see Resume) and the distinction of being on the Ohio Arts Council Touring Roster for many years, Jim McCutcheon is one of those rare performers who can relate to audiences of any age, or any combination of ages. With a broad repertoire ranging from classical guitar music from around the world to folk music of the USA, Jim adapts each performance to the venue. Concerts for grandparents and their grandchildren are a specialty.

In addition to having performed in England and Russia, Jim has performed for many artist series in communities in and around Ohio, including Akron, Lakeside, Warren, Lebanon, Beavercreek, Fairborn, Troy, Waynesville, Oakwood, Lancaster, Sylvania, Defiance, Cambridge, Portsmouth, Hamilton, Centerville, Springfield, Minster and Celina. He performed annually at MiddFest International Festival for many years, Ohio libraries and the Very Special Arts Festival held annually at Wright State University.

“We had preschoolers, elementary students, middle schoolers, some MRDD
groups, and several senior citizens groups all in the same crowd! Jim met the challenge with a mix of classical repertoire, some blues, and lots of audience interaction as he played each of his many instruments. At one point we had all
sizes of children and even nurse-assisted seniors dancing with him onstage! Generation gap? Not here. How often does that happen ? Thanks, Jim!”
– Susan Joyce, former Coordinator,
Miami University-Middletown Friday Series

“…including all ages that enjoyed your gentle approach with children. Parents
love to see their children interacting and performing and you provided a
wonderful opportunity for this. Your musical instruments are beautiful and
you expand our knowledge of music and history as well.
– Beverly Gilbert, Youth Services, Woodbourne Library 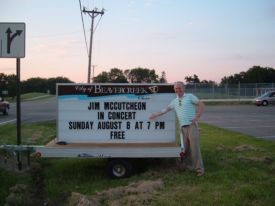