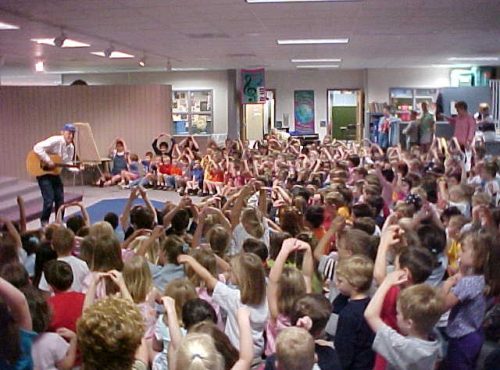 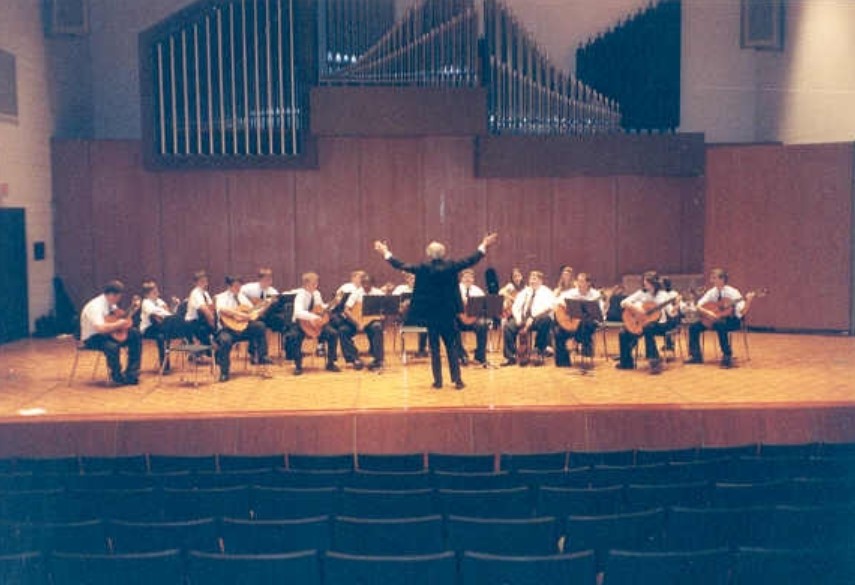 Having earned the 2017 Ohio Governor’s Award for the Arts in Arts Education, Jim has performed hundreds of school assemblies across the USA, and  earned the Muse Machine’s Prism Award for his extensive work with that organization in their elementary school program.

Here’s one example of Jim’s work in schools: For the past several years, Jim, also known as “The Guitar Man,” has been a guest artist in residency at the Overfield School in Troy, doing workshops for individual classes of students ages 2 through 6, showcasing his guitars and talking about music from around the world. He presents a culminating evening concert each year at the school for students’ and their families, showcasing the children’s learning in addition to having them perform music learned during the week. Part of the proceeds from CD and merchandise sales after the concert support the school’s general fund.

For information about residencies and performances, phone (937) 287-7755, or email Jim at jim@mccutcheonmusic.com.

“When scheduling shows for our Artist and Lecture Series, I have to ask myself many questions. Can a one-man show really work in a 750-seat auditorium filled with elementary school students? Yes, IF the one man is Jim McCutcheon. Last Friday’s show worked because Jim engaged and taught the audience. They were active participants in age-appropriate dialogue, singing, playing and movement. It is easy for me to sense the “success” of our shows by observing the students as they leave. These kids left happy.  Thanks, Jim.”     – Susan Joyce, Fantastic Free Friday coordinator, Miami University Middletown

“Mr. McCutcheon was one of the only performers who was able to maintain the preschoolers focus for the entire length of his show. At the same time, he incorporates all curious onlookers into his performance, catering to each personality. Overall, a true talent, and an excellent role model for children. I highly recommend his services.   – Diane Kunas, Director, Partners in Performance, Washington Township Recreation Center,  Ohio

“Jim brings enthusiasm and love for music that makes it contagious to all around him. The integration of music, science and math brought a fuller sense of the world . – Spring Hill Elementary School 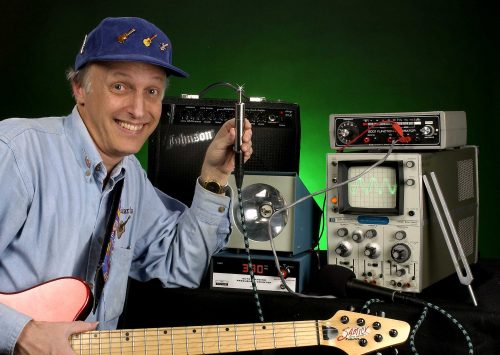 In addition to a Master of Music degree in Music Education, Jim McCutcheon holds a B.S. in Physics, as well as the amateur radio Extra Class license.

His workshops demonstrating the science of music use his electric guitar and are geared for K-12 and address concepts found in state standards. Students learn the relationships between several branches of science including electricity, magnetism, anatomy and computers. Students get to plug in wires, see shapes that are related to the sounds of their voices and instrument, adjust the equipment and join hands and make a giant human radio antenna!

High schools have been inviting Jim for this workshop and have their physics, music theory, band and orchestra classes attend. Jim explains many practical aspects of music from intonation (tuning) to where chord progressions come from on a physical level.

“Thank you for the wonderful performance – I had fun learning how music and science are related and dependent on each other. Your science concepts were right on target and age-appropriate. Thank you for conveying that performing music is fun while at the same time uses many skills. I will highly recommend your performance to all my colleagues. – Joan Tullis, E.D. Smith School, Oakwood, OH

Jim has been Artist-in-Residence at several educational facilities across Ohio, including Springer School (Cincinnati), The Overfield School (Troy), and others.
Residencies usually involve multiple days with students getting more exposure to Jim’s programs that just an assembly program, and often involve students writing and performing songs about their curriculum at a culminating concert.
Above (right), Jim rehearses the 8th grade guitar classes at Esther Dennis Middle School in Dayton, OH in spring, ’03. He was commissioned annually to compose music for these classes 2001-4. Workshops there continued through 2006. General music teacher Vicki Ullery received a Jennings Foundation grant for Jim’s first residency, and received continuing support from her principal.

At the top of the page (right), Jim rehearses the debut of his composition “Getting Serious” at Wright State University Concert Hall, April, 2003, with members of the 8th grade guitar classes at Esther Dennis Middle School. They were guests on the WSU School of Music’s student recital, and took annual tours of the campus.

“I learned that classical guitar can be just as fun as the others and that you love playing more and more as you play.”

“I learned…that you can do anything if you practice.”

“Don’t give up! Don’t give in! Do something with your life.”

“I learned to appreciate classical guitar. Up to this class the only songs I’ve ever played were rock songs.”

“I liked it when the whole piece came together and sounded the way it was supposed to.”